The Foreign Invaders of Ancient Egypt: The History of the Hyksos, Sea Peoples, Nubians, Babylonians, and Assyrians 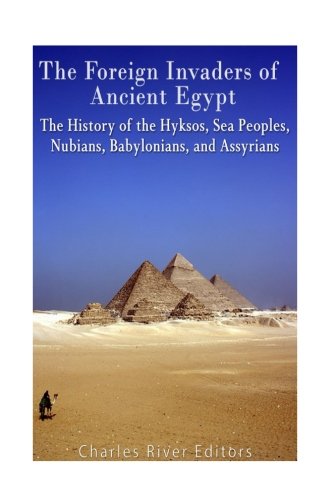 *Includes pictures *Includes ancient Egyptian accounts describing their enemies *Includes a bibliography for further reading From approximately 3100 BCE until around 1075 BCE, ancient Egypt was ruled by 20 different dynasties. The length of the dynasties varied: some, such as those during the First and Second Intermediate periods could be quite short, while the Thirteenth and 18th Dynasties each contained more a one dozen kings and ruled over the Nile Valley for around 200 years each. Although the first 20 Egyptian dynasties varied in number of rulers and length, most shared one important attribute: they were all native Egyptian dynasties. The one important exception came during Egypt’s Second Intermediate Period, when a mysterious foreign group of people, known as the Hyksos, conquered Egypt and established the Fifteenth and Sixteenth Dynasties some time shortly after 1700 BCE. For centuries, the Hyksos rule over Egypt was an enigma shrouded in half-truths and myth. It was only in the mid-20th century that Egyptologists, using newly discovered and translated texts, shed fresh light on the Hyksos to reveal details about their origins and rule in Egypt. The transition from the Bronze to the Iron Age during the late 13th and early 12th centuries BCE arguably changed the structure and course of world history more fundamentally than any period before or since. During this period, numerous wealthy and enduring kingdoms of the eastern Mediterranean Sea region collapsed, and new ones rose in their places. At the center of this period of turmoil was a group of people known today as the Sea Peoples, the English translation of the name given to them by the Egyptians. Despite their prominent role in history, however, the Sea Peoples remain as mysterious as they were influential; while the Egyptians documented their presence and the wars against them, it has never been clear exactly where the Sea Peoples originated from, or what compelled them to invade various parts of the region with massive numbers. It is often difficult for scholars to separate aspects of ancient Nubian culture that were truly unique and “Nubian” from those elements that were Egyptian, as the Nubians borrowed heavily in terms of culture from their northern neighbor. An in-depth examination of the ancient Nubians reveals that although the Nubians were closely related culturally in many ways to the Egyptians, they produced a culture that had many of its own unique attributes. Today, Babylon has become a byword for greed, excess, and licentiousness, mostly due to its mention in the Bible, but a closer examination reveals that Babylon was so much more, and even perhaps the most important city in the ancient world. Ancient Babylon was home to great dynasties that produced some of the world’s most influential leaders, most notably Hammurabi and Nebuchadnezzar, and these rulers invoked their wills on the entire ancient Near East and have been remembered as both progressive and cruel all at the same time. Babylon was also the seat of culture in ancient Mesopotamia and the place where scholars made amazing scientific advances that would not be eclipsed for several centuries. Like a number of ancient individuals and empires in that region, the negative perception of ancient Assyrian culture was passed down through Biblical accounts, and regardless of the accuracy of the Bible’s depiction of certain events, the Assyrians clearly played the role of adversary for the Israelites. Although the Biblical accounts of the Assyrians are among the most interesting and are often corroborated with other historical sources, the Assyrians were much more than just the enemies of their neighbors and brutal thugs. A historical survey of ancient Assyrian culture reveals that although they were the supreme warriors of their time, they were also excellent merchants, diplomats, and highly literate people who recorded their history and religious rituals and ideology in great detail.