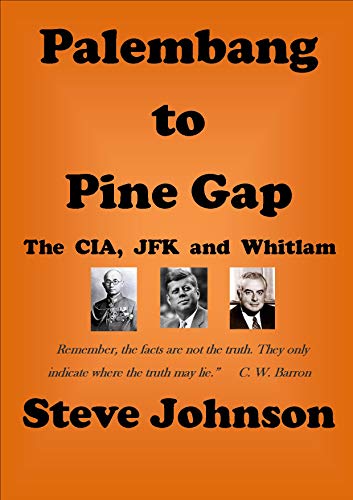 This is an exciting story of a Japanese war criminal in Singapore in 1942, and a fictional Dutch family in Palembang, whose lives intertwine over the years.

This book asks many questions and suggests some answers about JFK’s assassination in Dallas and Whitlam’s dismissal in Australia.

How did the CIA manipulate history from the Congo to Cuba and beyond?

What if the bullet that changed history in Dallas had missed its target?

What’s the real story behind the ‘dismissal’ of Australian Prime Minister Gough Whitlam?

If Australian Governor-General Sir John Kerr had not been “our man” as the CIA claimed he was, would the Canberra conspiracy have escalated to assassination as it had in Dallas?

“Remember, the facts are not the truth. They only indicate where the truth may lie.” C. W. Barron

Gripping historical fiction based on the real life exploits of a Japanese war criminal, Masanobu Tsuji and his involvement with a Dutch family. Known as the God of Operations, Tsuji headed the Japanese army’s charge down the Malay Peninsula to take Singapore in February 1942. Tsuji later worked with the MacArthur administration in post war Japan and became a successful politician.

Tsuji’s history combines with that of the CIA in its early days. The immense power of the Dulles Brothers, Secretary of State, John Foster and CIA Director Allen, enabled them to carry out covert operations in many countries. Many activities were funded by loot often referred to as “Yamashita’s gold”, plundered by the Japanese from the countries they invaded before and during World War II.

The fictional Dutch van der Laan family lived in Palembang and Luuk ran the main oil refinery producing aviation gasoline which the Japanese desperately needed. His resistance made him a marked man and he had to arrange for his family to escape without him.

Not knowing what happened to Luuk, Mila, Anouk and Pieter begin anew. How the family coped with the dislocation and upheaval of life as the world “resettled” and decolonized is graphically illustrated.

Eventually Mila remarries and later becomes a Labor backbencher and works hard as a socialist and feminist in “white Australia” during the 1950s and 60’s.

Luuk’s son Pieter serves in the Australian Navy then flies for Air America in the “secret war” in Laos. After meeting Li, a beautiful Singaporean Chinese girl, Pieter discovers his father’s fate was the same as her father’s.

Pieter pursues Tsuji knowing he is responsible for what happened to Luuk. Tsuji, hailed a war hero in Japan and now a successful politician, is involved with the Yakuza (Japanese Mafia) and the CIA and travels often to the Golden Triangle.

On the trail of Tsuji, Pieter and Li arrive in Dallas in November 1963.

The book discovers the real motives for JFK’s assassination and the conspirators behind it and offers an alternative ending.

The reader will find out how the Queen of Australia and her Governor General, along with MI6, the CIA and others conspired to bring about the removal of the elected Prime Minister in 1975.

This ‘dismissal’ is given an alternative scenario in Steve Johnson’s story.

Historical fiction or feel good fantasy? You be the judge!