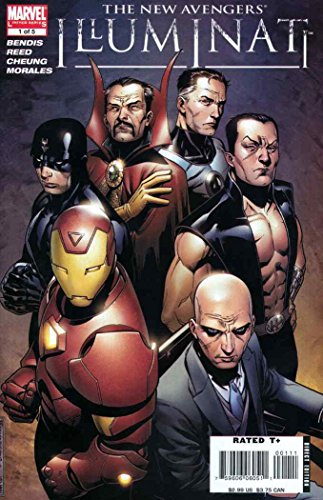 Written by Brian Michael Bendis, Brian Reed. Illustrated by Jim Cheung. The Illuminati is a secret organization comprised of several of the world’s most powerful heroes: Sorcerer Supreme Doctor Strange, Black Bolt, King of the Inhumans, Charles Xavier, founder of the X-Men and mutant rights activist, Reed Richards, founding member of the Fantastic Four, Namor the Sub-Mariner, King of Atlantis and Iron Man (Anthony Stark), founding member of the Avengers. These six men have worked together to mold and shape the status of the superhuman world and the world around it. How and what they have done together has remained a mystery… UNTIL NOW… Writers Brian Michael Bendis ( Avengers, Ultimate Spider-Man) and Brian Reed ( Ms. Marvel) have joined together with Jim Cheung (Young Avengers) to reveal this untold story of the Marvel Universe and the Illuminati’s actions affect today!