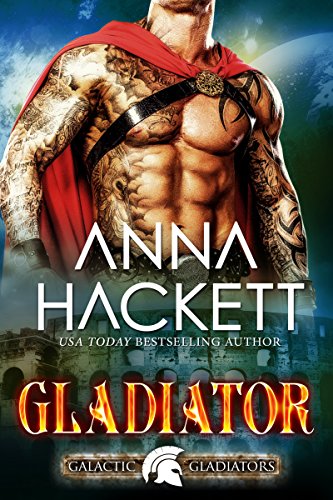 Fighting for love, honor, and freedom on the galaxy’s lawless outer rim…
When Earth space marine Harper Adams finds herself abducted by alien slavers off a space station, her life turns into a battle for survival. Dumped into an arena on a desert planet on the outer rim, she finds herself face to face with a big, tattooed alien gladiator…the champion of the Kor Magna Arena.

A former prince abandoned to the arena as a teen, Raiden Tiago has long ago earned his freedom. Now he rules the arena, but he doesn’t fight for the glory, but instead for his own dark purpose–revenge against the Thraxian aliens who destroyed his planet. Then his existence is rocked by one small, fierce female fighter from an unknown planet called Earth.

Harper is determined to find a way home, but when she spots her best friend in the arena–a slave of the evil Thraxian aliens–she’ll do anything to save her friend…even join forces with the tough, alpha male who sets her body on fire. But as Harper and Raiden step foot onto the blood-soaked sands of the arena, Harper worries that Raiden has his own dangerous agenda…

Note to readers: This sci fi romance contains a lot of action (think wild gladiatorial fights and daring rescues), tough gladiators (the warriors of the House of Galen) and a steamy romance (between a fierce space marine and a gritty, alpha male gladiator). So if you like it fast, and gritty, and sexy, this is for you!

Q & A with the Author

Q – How would you describe the Galactic Gladiators series?
A – Gladiators in space! The desert planet of Carthago is home to the Kor Magna Arena: it’s a mix of low and high tech. Think the Colosseum of Ancient Rome with a touch of professional sports and a side of Las Vegas glitz and temptation. You’ll see a lot of action-packed romance as women abducted from Earth clash with tough, gritty gladiators fighting for love, honor, and freedom.

Q – Why did you want to write the series?
A – It’s no secret that I love action, adventure and romance. And I love science fiction romance and all the endless possibilities. Raiden, the gladiator hero of Gladiator, stormed into my head and wanted his story told. I saw this big, tough man covered in tattoos facing off with an equally tough female space marine from Earth. That’s where it all began, and since then the planet of Carthago, the intrigues of the Kor Magna Arena, and an amazing band of gladiators came to life.

Q – What order should I read the books in?
A – All the Galactic Gladiator books will be stand-alone romances centered on the Kor Magna Arena, rescuing abducted humans, and making a life far from home. Here’s the order I suggest:

About Anna: I’m passionate about all things action romance. I love stories that combine the thrill of falling in love with the excitement of action, danger and adventure. I write about people overcoming unbeatable odds and achieving seemingly impossible goals. I like to believe it’s possible for all of us to do the same.