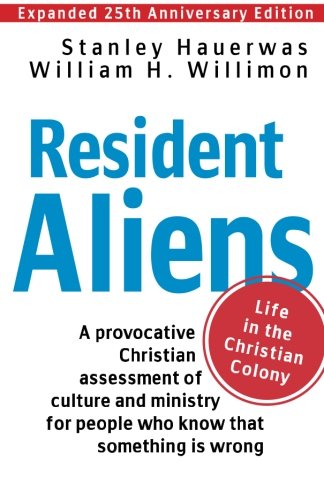 Only when the Church enacts its scandalous Jesus-centered tradition will it truly be the body of Christ and transform the world. Twenty-five years after its first appearance, Resident Aliens remains a prophetic vision of how the Church can regain its vitality, battle its malaise, reclaim its capacity to nourish souls, and stand firmly against the illusions, pretensions, and eroding values of today’s world.

Resident Aliens discusses the nature of the church and its relationship to surrounding culture. It argues that churches should focus on developing Christian life and community rather than attempting to reform secular culture. Stanley Hauerwas and William H. Willimon reject the idea that America is a Christian nation; instead, Christians should see themselves as “resident aliens” in a foreign land. According to Hauerwas and Willimon, the role of Christians is not to transform government but to live lives that model the love of Christ. Rather than try to convince others to change their ethics, Christians should model a new set of ethics that are grounded in the life, death, and resurrection of Christ.

The Council of Illuminati Relations - the Great Real Conspiracy