The Conspiracy of Capital: Law, Violence, and American Popular Radicalism in the Age of Monopoly 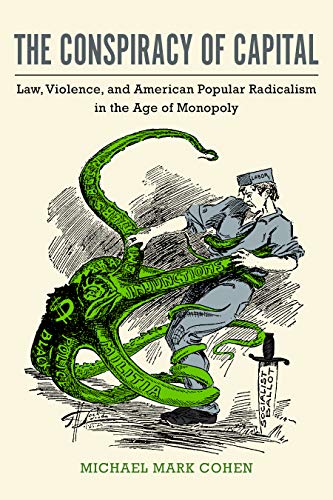 Between the 1880s and 1920s, a broad coalition of American dissidents, which included rabble-rousing cartoonists, civil liberties lawyers, socialist detectives, union organizers, and revolutionary martyrs, forged a culture of popular radicalism that directly challenged an emergent corporate capitalism. Monopoly capitalists and their allies in government responded by expanding conspiracy laws and promoting conspiracy theories in an effort to destroy this anti-capitalist movement. The result was an escalating class conflict in which each side came to view the other as a criminal conspiracy.

In this detailed cultural history, Michael Mark Cohen argues that a legal, ideological, and representational politics of conspiracy contributed to the formation of a genuinely revolutionary mass culture in the United States, starting with the 1886 Haymarket bombing. Drawing on a wealth of primary sources, The Conspiracy of Capital offers a new history of American radicalism and the alliance between the modern business corporation and national security state through a comprehensive reassessment of the role of conspiracy laws and conspiracy theories in American social movements.

Aliens on the Moon