The Civilization Of Ancient Egypt 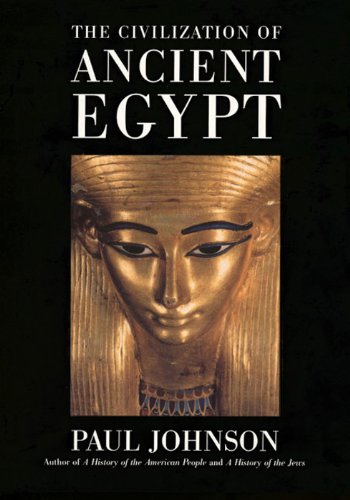 A leading historian and bestselling author re-creates the growth, decline, and legacy of 3,000 Years of Egyptian civilization with an authoritative text splendidly illustrated with 150 illustrations in full color.

Ancient Egypt, with its legacy of pyramids, pharaohs and sphinxes, is a land of power and mystery to the modern world. In The Civilization of Ancient Egypt Paul Johnson explores the growth and decline of a culture that survived for 3,000 years and maintained a purity of style that rivals all others. Johnson’s study looks in detail at the state, religion, culture and geographical setting and how they combined in this unusually enduring civilization. From the beginning of Egyptian culture to the rediscovery of the pharaohs, the book covers the totalitarian theocracy, the empire of the Nile, the structure of dynastic Egypt, the dynastic way of death, hieroglyphs, the anatomy of perspective art and, finally, the decline and fall of the pharaohs, Johnson seeks, through an exciting combination of images and analysis, to discover the causes behind the collapse of this, great civilization while celebrating the extra-ordinary legacy it has left behind.

Paul Johnson on Ancient Egypt and the Egyptians

“Egypt was not only the first state, it was the first country…. The durability of the state which thus evolved was ensured by the overwhelming simplicity and power of its central institution, the theocratic monarchy.”

“The Egyptians did not share the Babylonian passion for astrology, but they used the stars as one of many guides to behavior. No Egyptian believed in a free exercise of will in important decisions: he always looked for an omen or a prophecy or an oracle.”

“The development of hieroglyphics mirrors and epitomizes the history of Egyptian civilization. . . . No one outside Egypt understood it and even within Egypt it was the exclusive working tool of the ruling and priestly classes. The great mass of Egyptians were condemned to illiteracy by the complexities (and also the beauties) of the Egyptian written language.”

“The affection the Egyptians were not. ashamed to display towards their children was related to the high status women enjoyed in Egyptian society.”

“If we can understand Egyptian art we can go a long way towards grasping the very spirit and outlook on life, of this gifted people, so remote in time. The dynamic of their civilization seems to have been a passionate love of order (maat to them), by which they sought to give to human activities and creations the same regularity as their landscape, their great river, their sun-cycle and their immutable seasons.”