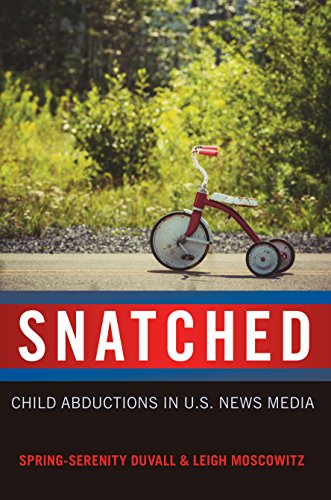 Few crimes provoke the collective fear, public outrage, and media fascination that child abductions do. Stories about missing children capture national headlines and dominate public discourses about crime and deviance, child safety, parenting, the American family, and gender and sexuality.
Snatched is the first book-length study to interrogate the predominant myths centered on gender and class that shaped mainstream U.S. news coverage of kidnappings in the 2000s. Through an exploration of hundreds of reports from newspapers, news magazines, television broadcasts, and web stories, Snatched critically analyzes how news narratives construct the phenomenon of child abductions, the young girls and boys who fall victim, the male perpetrators of these horrific crimes, and the adult victims of long-term abductions who were found years later. The book’s interdisciplinary nature, methodological rigor, and thorough investigation into some of the most riveting and revolting crimes of the last decade make Snatched a worthy, important, and timely contribution to the fields of media studies and girlhood studies.