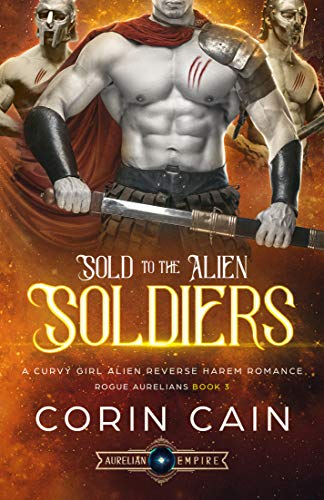 I have no freedom.

The one thing left to me is safety and security. Any man that dares touch me would lose a… very precious body part.

When four huge, disgusting Bullfrogs enter the planet, I know I’m safe. I weep for the woman forced into their slimy harems, but I will not be touched.

When three dominant, arrogant Aurelians enter the city, I am off limits. The seven-foot-tall alien species are brutal, powerful, and muscled like Greek-Gods. They search their entire lives for their fated mate, the one woman who can bear their sons through the dark, powerful Bond.

I feel the pain of the women forced to endure their harsh punishment and fearsome mating frenzies, but I will not be touched.

That’s what I thought – until my owner decides my innocence is worth more at an alien auction house than in his personal collection.

I’ll be beautified, leashed, and forced on stage to face my fate.

Sold to the Alien Soldiers is the third book in the Rogue Aurelian series of the Aurelian Empire, where the strong, powerful alien warriors come in threes! This is a standalone alien reverse harem romance.