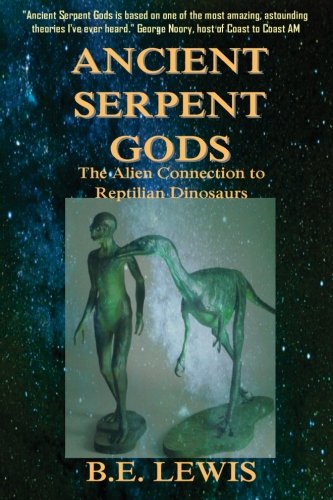 “Ancient Serpent Gods is based on one of the most amazing, astounding theories I’ve ever heard.” – George Noory, renowned host of Coast to Coast AM, April 11, 2017

The Greatest Lie Ever Told on evolution, religion, and human origins now revealed. CBS 60 Minutes interview with Robert Bigelow of Bigelow Aerospace on May 28, 2017 has had Close Encounters and stated this, “They [aliens] are just under people’s noses.” Or as Lewis claims, “Under our feet!”

B.E. Lewis offers some of the most compelling evidence ever presented by an author on the gray and reptilian presence. We can’t ignore that something inexplicable has happened to millions of people who claim to be abducted. Are we dealing with invisible beings like the Jinn, extraterrestrials, dimension beings or terrestrial beings that have lived on Earth for millions of years? Finally, a new theory!” — Ann Druffel, bestselling author of How to Defend Yourself Against Alien Abduction and The Tujunga Canyon Contacts

Dinosaurs once dominated the Earth but just imagine if a species of intelligent dinosaur survived and evolved over 200 million years and then went underground to become what human abductees describe as reptilian aliens. That is the hypotheses of B.E. Lewis in her latest book ANCIENT SERPENT GODS. Are Reptilian beings responsible for the disappearance of thousands of people, genetic altering of human DNA, mysterious booms heard worldwide, UFOs entering and existing oceans and why ancient civilizations worldwide worshiped Serpent Gods? Discover what Dulce Base security officer Thomas Castello, Dulce geologist Phil Schneider and CIA Pilot and Area 51 engineer John Lear tried to warn us about the reptilian underground presence and their dark agenda.

This book deals an astounding blow to all our preconceived beliefs about human and dinosaur evolution. Did a species of dinosaurs actually survive an extinction event 65 million years ago, did humans exist with them, and did they possess nuclear warfare millions of years ago as evidence shows? Has Earth always been dominated by an intelligent dinosaur known to ancient civilizations as Serpent Gods? Discover how ancient texts describe nuclear wars, serpent gods and how they mated with human women. Did they genetically create Homo sapiens and other Earth species? Could this be the greatest revelation of all time, the one that has been kept from humanity for eons: Serpent Gods are TERRESTRIAL and have controlled us for eons?

This book will challenge your beliefs on religion, evolution, aliens and UFOs and their agenda for humanity. Are you ready for the shocking truth?

EVOLUTION, ANCIENT ALIENS, and the PROGENITORS of MANKIND ( PART 3 of 3 ) : VEDIC PERSPECTIVE RADIO