Worlds Away (Warriors of Risnar Book 4) 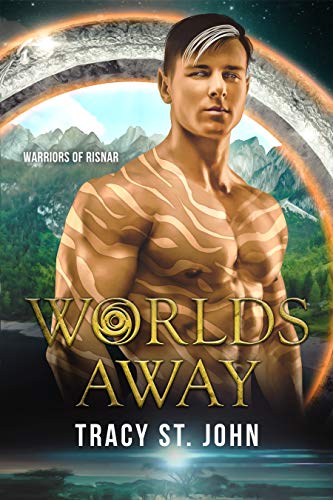 She escaped from a cult. Fought in Afghanistan with an Explosives Ordinance Disposal unit. Was discharged from the Army after a court martial. Fired from her latest job. Selena ‘Boom-Boom’ Baumer is no stranger to conflict. However, diving into an interstellar war on a planet she’s never heard of is pushing the limits, even for this rebel. It’s only temporary though, and in the meantime, the striped alien men are easy on the eyes. Helping them defeat a monstrous race of invaders can’t be a bad thing, right?

Arga Bolep, war commander of the planet Risnar, needs an explosives expert, and Selena comes highly recommended. He’s not sure what he’s supposed to do with this blue-haired, naughty-limerick singing, hardcore partier, but he knows one thing’s for sure: he’s not about to fall in love. Not when he’s too aware of how gut-wrenching loss can be. Despite his fascination with Selena, he’ll keep their relationship as professional as her outrageous personality will allow.

When the enemy race of Monsuda launch a surprise attack, threatening both Risnar and Earth, Selena and Arga are forced to depend on each other just to survive. A reckless plan to defeat the enemy could spell doom for the reluctant lovers—but the more impulsive feelings they have for each other try their hearts and souls.

The Illuminati: The Hollow Earth Conspiracy