Confessions of an Illuminati Volume 5: The Decline of the West and the Rise of Satanism in our Society 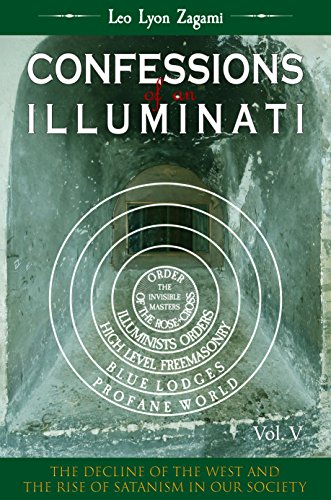 Praised as a top expert on the Vatican and Secret Societies by important figures of todays war against Satanism and the New World Order, such as Alex Jones, Zagami is now regarded in the US and around the world as a household name in the fight against the Occult elite. The publication of his books in the English language has demonstrated to the world the accuracy of his predictions. In volume 5, Zagami goes one step further, with a detailed look at the network of Secret Societies, that include Freemasonry, various Illuminati groups, and Orders born out of the Western Initiatic System, and how they were gradually made corrupt by evil forces and black magic, facilitating the rise of modern Satanism, and atheism, and the decline of our Society.

Zagami, who was forced to suppress The Decline of the Western Initiatic System and the rise of Satanism in our Society, by one of the Illuminati sects he criticized in the book, includes much of its content in volume 5, and further explores the secret traditions, rituals, and techniques used by the so-called Illuminati, and the implementation of a One World Government and Religion with the unusual alliance of Marxism and Islam, both linked to Satanism.