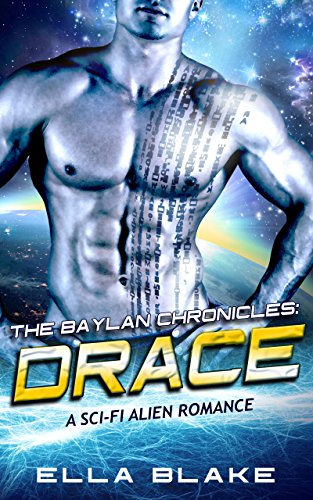 Rachel Harkett’s temp job gets a lot more interesting when Drace, an injured, gorgeous hunk of a guy, staggers in her office after hours. He’s tall, ripped, has color-changing tattoos, and says he’s being followed by a shadowy government agency. He heals so fast, he can’t be human. Rachel can deal with the fact that Drace is an alien from a massive base ship circling Earth, but she can’t accept his claims that the intense attraction blazing between them is because she is his true, biological mate. When agents close in, the two go on the run to find Drace’s shuttle so he can return home. What Rachel doesn’t count on is Drace taking her to his base ship with him.

The only thing Drace Dal-Allean, Saar-king of the Baylan people, wants is keep his beautiful human woman alive and safe. She became his mate the moment she touched him, as evidenced by the new soul marks appearing on his chest. The longer they’re bound together, the harder it becomes to ignore the demands of his body and soul. Rachel shares his attraction, but finds it hard to believe that she could be his queen on the base ship he commands.

The sudden appearance of a Baylan base ship within view of Earth throws the human race into turmoil, forcing Rachel to adapt to her new life fast. Caught between two worlds, Rachel risks losing the world she knows and the sexy alien king who has awakened her heart.

The Odd Vanishing of Amelia Earhart