Ancient Aliens and the Age of Giants: Through the Wormhole (Volume 2) 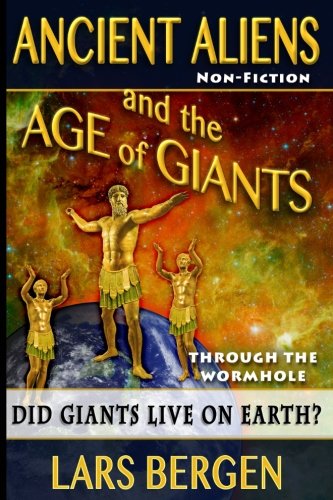 Analyze thousands of years of giant skeletons from 7 to 15 feet tall, along with DNA evidence, genetic mutations, newspaper articles, archeological notes, and excerpts from the Smithsonian Institution’s own records.

Historical accounts, first-person encounters, plus legends and mythology tell us who they were, where they came from, how they interacted with humans, and left us with predictions of their return.

There is a systematic attack on the evidence, however, that keeps giants mired in disbelief and ridicule. Documents are being rewritten one word at a time to give us an altered history that completely erases extraterrestrial giants, except in the realm of fairytales and fantasy.

Dissect several alleged hoaxes and questionable discoveries for an in-depth look at how debunkers twist the facts.

The easiest way to hide the truth is to bury it under accusations of incompetency, hoaxes and frauds, so that archeologists and anthropologists distance themselves from the controversy, and everyone questions the authenticity of the bones or artefacts.

Meet specific giants including Goliath, King Og, Hiawatha, Odin, and The Watchers of the Bible.

Stolen artefacts, witch hunts, and the total annihilation of the bones of heretics and biblical giants eliminated a big chunk of evidence. The gruesome fate of old bones in general plunges us into a Twilight Zone of the bizarre.

Today the Battle of the Bones rages on over old hoaxes and new laws. The fate of the giant bones goes far beyond denial or government cover-up, however. More important than the controversy over missing evidence is what will happen when the extraterrestrial giants return.

Conspiracy theories keep humans busy with finger pointing and demands for the truth, when what we should really be focused on is who the extraterrestrial giants were, and what to expect when they return.

Are we ready? Look at the evidence, and judge for yourself.