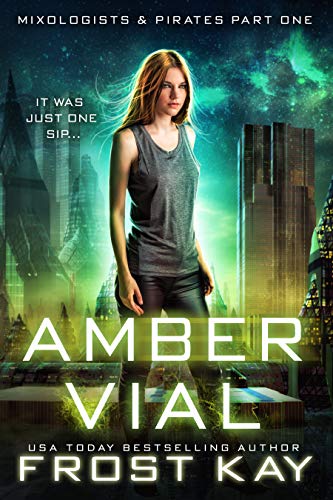 Fact #257 – Allie Sai should have been named “Unlucky.” It made complete sense that the girl terrified of flying and aliens would be drafted for colonization of an alien planet. Right? Right??

In her mind, she had one choice. Desertion. But again… Unlucky. She should’ve known better. A failed escape attempt leaves her chained to an airship chair with nothing but her bag, a vial of her family’s super moonshine, and her anxiety for company.

Fact #372 – Sometimes moonshine is not the answer.

Numbing her fear seemed like a brilliant idea – until pirates attack her ship looking for goods of the female variety. Looks like she’ll have to save herself, but… unlucky strike three.

It was just one sip… maybe two.

When fantasy and reality blur, can Allie save herself?

“I found the writing to be on par with Queen (Sarah J.) Maas and Elise Kova.”– Fairestskyebooks

“Frost Kay makes you want to smack the characters with their own book.”– Pages of Remedyz

“(Frost Kay) has a very beatiful and simple way of writing…everything is painted so vividly and beautifully…she has me hooked.” –Carissa, Goodreads