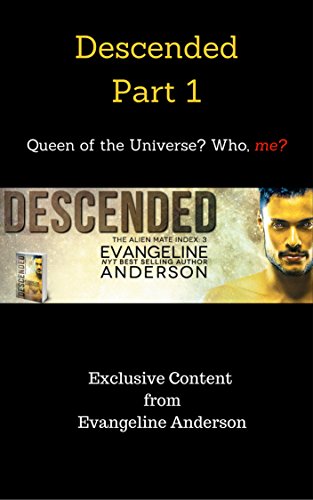 ***This novella is part 1 of Descended, book 3 of the Alien Mate Index series.***
Hi, I’m Charlotte Walker, medical intern, straight A student and Empress of the Galaxy.

Wow, that escalated quickly, right? But it’s true–at least according to the muscular giant with multicolored eyes and golden skin who turned up in my ER the other night. He says his name is Kristoff Verrai and he’s the Captain of the Goddess-Empress’s Imperial Guards.

The Goddess Empress being me.
See, I’m supposedly the new Incarnation of the royal and divine being who rules over all sentient life in the Milky Way. Seriously, I can’t even get my laundry done half the time and now I’m supposed to be the Queen of Everything? Who made up this system, anyway?

Now I’m dodging assassin-droids and competing with would-be impostors to the throne while I try to stop myself from falling for my gorgeous Guard. Because I’m a Royal and he’s a commoner, I’ll never be allowed to have him as my Consort.
It doesn’t seem fair–but then, neither does the fact that I’m Descended from the old Empress and destined to rule the galaxy.
What am I going to do?

***This short novella is part 1 of Descended, book 3 of the Alien Mate Index series. This is NOT the whole book which comes out at the end of August***