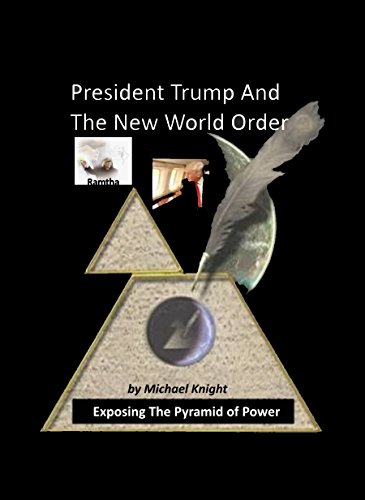 This book is based on a December 8 2016 prophecy, and was published in September 2017 – a month before the Q or Qanon team began attracting thousands of patriots to a discussion board on the Internet.

Using the metaphor of Neo taking the Red Pill in the movie The Matrix, they have become a force to reckon with in what is The Great Awakening – what is also the Second Revolution underway in America as the swamp dwellers fight for survival – and they are deadly adversaries.

To Make America Great Again ( MAGA ) President Trump has to Drain The Swamp – and he is doing it against all opposition from the Deep State and the Fake News media.

Taking the lid off the pyramid of power, “President Trump And The New World Order” walks you through the veil behind which families such as the Rothschilds and Rockefellers have spent generations, both publicly and behind the scenes, manipulating governments, politicians, and ordinary people alike in order to build their New World Order.

President Trump is under siege as outlets like CNN (referred to in this book as the Cabal News Network), continue to insist that he is unfit for the job.

What they will never report – but what is revealed here, exclusively – is that President Donald Trump has friends in very high places.

Among them is Ramtha the Enlightened One.

Ramtha is an enigma to many people, but who he is, is well documented in this book – along with his prophecy about President Trump, and UFOs, and why this encounter will lead to some truly radical changes for America and the entire world.creatspace.com

Just as evil can hide within good, good can also be obscured by chaos – which seems to be the current state of America under the Trump presidency.

This book provides new and rational insights into the many ways in which deceivers under the appearance of doing good have indeed created and indulged in a tremendous amount of evil, ranging from assassination of presidents and prime ministers who opposed their agendas, to false flag events that have resulted in major wars and the loss of many lives, to the establishment of central banks that have control of the money supply – control of governments – control of people – right down to the ordinary man in the street.

That is about to end.

The fact that President Trump has friends in high places, as revealed in this book, also makes him the leader of “the radical few” – the “few” being a few thousand, then tens of thousands, then millions who, as Ramtha also predicted long ago, are now “rising up” and unmasking the Deep State and its corrupt families, corporations, politicians and agency personnel.

This book is the backstory about how the Deep State evolved – and how it will end.