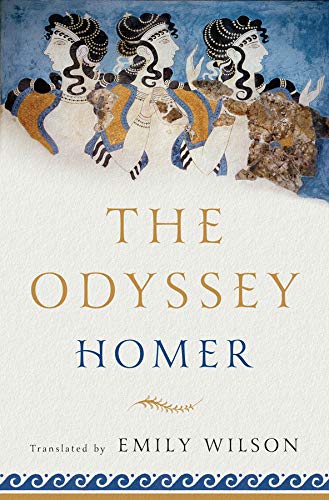 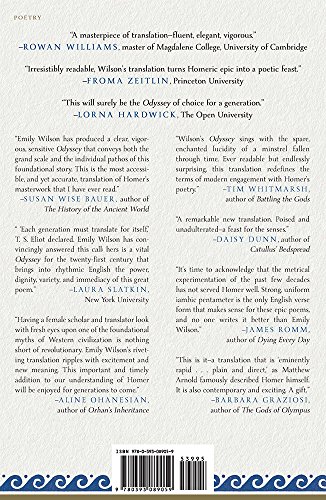 The first great adventure story in the Western canon, The Odyssey is a poem about violence and the aftermath of war; about wealth, poverty, and power; about marriage and family; about travelers, hospitality, and the yearning for home.

In this fresh, authoritative version―the first English translation of The Odyssey by a woman―this stirring tale of shipwrecks, monsters, and magic comes alive in an entirely new way. Written in iambic pentameter verse and a vivid, contemporary idiom, this engrossing translation matches the number of lines in the Greek original, thus striding at Homer’s sprightly pace and singing with a voice that echoes Homer’s music.

Wilson’s Odyssey captures the beauty and enchantment of this ancient poem as well as the suspense and drama of its narrative. Its characters are unforgettable, from the cunning goddess Athena, whose interventions guide and protect the hero, to the awkward teenage son, Telemachus, who struggles to achieve adulthood and find his father; from the cautious, clever, and miserable Penelope, who somehow keeps clamoring suitors at bay during her husband’s long absence, to the “complicated” hero himself, a man of many disguises, many tricks, and many moods, who emerges in this translation as a more fully rounded human being than ever before.

A fascinating introduction provides an informative overview of the Bronze Age milieu that produced the epic, the major themes of the poem, the controversies about its origins, and the unparalleled scope of its impact and influence. Maps drawn especially for this volume, a pronunciation glossary, and extensive notes and summaries of each book make this an Odyssey that will be treasured by a new generation of scholars, students, and general readers alike.