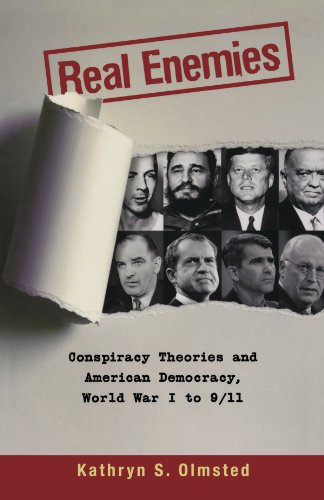 Many Americans believe that their own government is guilty of shocking crimes. Government agents shot the president. They faked the moon landing. They stood by and allowed the murders of 2,400 servicemen in Hawaii. Although paranoia has been a feature of the American scene since the birth of the Republic, in Real Enemies Kathryn Olmsted shows that it was only in the twentieth century that strange and unlikely conspiracy theories became central to American politics. In particular, she posits World War I as a critical turning point and shows that as the federal bureaucracy expanded, Americans grew more fearful of the government itself–the military, the intelligence community, and even the President. Analyzing the wide-spread suspicions surrounding such events as Pearl Harbor, the JFK assassination, Watergate, and 9/11, Olmsted sheds light on why so many Americans believe that their government conspires against them, why more people believe these theories over time, and how real conspiracies–such as the infamous Northwoods plan–have fueled our paranoia about the governments we ourselves elect.

Ancient Aliens - THE EVIDENCE - must watch!