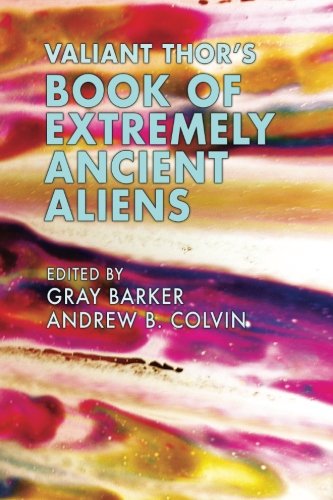 In “Valiant Thor’s Book of Ancient Aliens,” the illustrious cosmic thinker, Valiant Thor (also known as “The Stranger at the Pentagon”), presents several of his favorite articles from Saucerian publications over the years, throwing interesting new light on the Ancient Aliens meme.

Initially edited by the master of the ufological genre himself, Gray Barker, this updated volume will keep any paranormal reader up late at night, wondering at the vastness of space and the immensity of the UFO problem.

This special reprint features introductions by Thor and Barker, as well as groundbreaking research from Fortean luminaries like Ivan T. Sanderson (on various Forteana), NASA scientist Maurice Chatelain (on Ancient Aliens), Erich Von Daniken (on the ideal spacecraft), John A. Keel (on the Sky Gods), M.K. Jessup (on Ancient Astronauts), W. Raymond Drake (on Spacemen in Ancient History), Jacques Bergier (on Space Gods and the Birth of Man), and several others. Quality research such as this does not go out of style, and is still applicable – even vital – to our understanding of the UFO riddle today.

“Chances are astronomical that readers will be uplifted…” -Maurice Chatelain