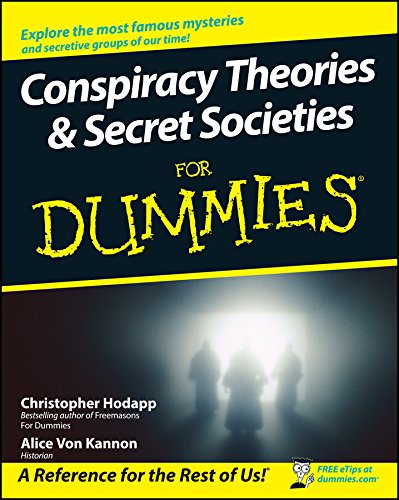 Entering the world of conspiracy theories and secret societies is like stepping into a distant, parallel universe where the laws of physics have completely changed: black means white, up is down, and if you want to understand what’s really going on, you need a good reference book. That’s where Conspiracy Theories & Secret Societies For Dummies comes in.

Whether you’re a skeptic or a true believer, this fascinating guide, packed with the latest information, walks you through some of the most infamous conspiracy theories — such as Area 51 and the assassination of JFK — and introduces you to such mysterious organizations as the Freemasons, the Ninjas, the Mafia, and Rosicrucians. This behind-the-curtain guide helps you separate fact from fiction and helps you the global impact of these mysterious events and groups on our modern world. Discover how to:

Why do hot dogs come in packages of ten, while buns come in eight-packs? Everybody knows its a conspiracy, right? Find out in Conspiracy Theories & Secret Societies For Dummies.

Ancient Aliens: Is Temple Mount a Gateway to Heaven? | History