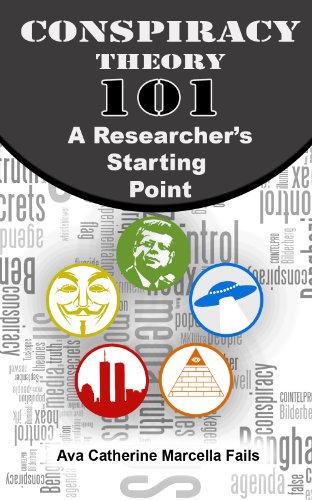 Have you ever asked yourself “What’s really going on?” after watching a news story?

Maybe you have wondered, “What is the government REALLY doing?”
Perhaps you’ve caught a slip of something an “official” shouldn’t have said and wanted to know the other side of the story.

Conspiracy Theory 101 explores some of these situations. When the government is silent, theories fill the space in a genuine effort to see the big picture.

Sometimes those theories become fact when whistleblowers talk or years later when the documents are declassified.

Conspiracy Theory 101 explores common conspiracy theories starting out with the JFK assassination and September 11th. (and more…see Table of Content below) Then it shows you theories that became fact like MK Ultra, the Tuskegee Experiment, and Human Testing.

If you want more, Conspiracy Theory 101 will take you ever deeper by covering Population Control, Agenda 21, and the Georgia Guidestones.

After that, Conspiracy Theory 101 will take you for a ride on the crazy train. Don’t worry, you can get off before the wreck.

Included in this book is your jump start to researching on your own. Put your investigative skills to work and join the vibrant community of truth-seekers. The Chapter of Research and Reference material is worth the 99 cents by itself.

MORE ABOUT WHAT”S INSIDE:

WHO THIS BOOK IS FOR:

Conspiracy Theory 101 is for the new or seasoned researcher. If you’re already a hardcore conspiracy theory researcher, you’re going to see a lot of familiar topics here. However, you might see some you’ve never heard of or learn new information about ones you have studied before. Even if all the topics are old news, the Research and Reference Materials are worth your time.

Conspiracy Theory 101 touches briefly on various topics and then gives a spring board to continue your research.