Evidence of the Gods: A Visual Tour of Alien Influence in the Ancient World 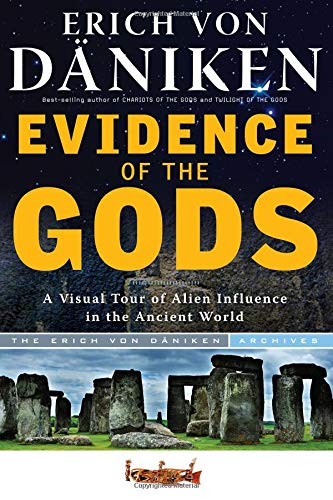 Ancient humans had the natural urge to document the world in which they lived, a fact that is evident in the cave paintings and carvings that still exist today. Why do rock paintings from various sites around the world all seem to depict the same things? Did the peoples of the prehistoric world have contact with each another? Is it possible that some were transported to far-flung locations in what our ancestors could only have described as “flying chariots”?

Erich von Däniken, one of the best-selling authors of all time and regarded by many as the father of the ancient alien theory, continues his mission to uncover Earth’s ancient past–this time with more than 150 extraordinary full-color photographs–in Evidence of the Gods.

This extensively illustrated book features never-before-seen photographs from his unique archive, compiled throughout decades of searching around the world for traces of the cosmic gods whom he believes came to Earth thousands of years ago. Evidence of the Gods offers the best and most impressive evidence to date, along with concise explanations for the images, to bolster the case that von Däniken has already been making quite convincingly for years.

Evidence of the Gods is his most convincing–and thoroughly entertaining–work yet.

Did extraterrestrial visitors really leave their unmistakable traces on our planet thousands of years ago?

The images will speak for themselves.