Epic of Gilgamesh: An Annotated Prose Rendition Based upon the Original Akkadian, Babylonian, Hittite and Sumerian Tablets with Supplementary Text . 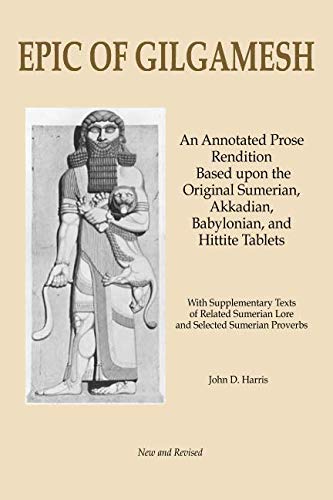 The Epic of Gilgamesh is the oldest written chronicle in the world, composed three to four thousand years before Christ. It tells events in the life of a king in an ancient city of Mesopotamia. The text is revered, and the hero is an icon of Mesopotamia, equal in tradition to the Jewish hero David as told in the Bible or the Greek hero Achilles as told in the Iliad, both of which it precedes as literature and in some aspects it anticipates. For untold centuries, even into the last millennium before Christ, the children of what is now Iraq learned to read and write by copying Gilgamesh, just as once Greek children learned to read and write by copying the Iliad and just as before the 20th century in Europe and America children learned to read and write from the text of the Bible. References to Gilgamesh in daily speech were commonplace.The Epic of Gilgamesh is called an “epic” in the tradition of the Greek Iliad or the medieval Beowulf. Like epic poems, the central figure is admired for his prowess and power; he is a heroic warrior, whose greatest adventure is here recounted. Gilgamesh belongs to the tradition of all mythical heroes whose adventures take place in a reality that transcends us or that in another sense is always present. It is the realm of eternity. It is the “other world” where what is human is strange, what is human lacks normal power or significance. In its dream-like quality, a deliquescence of thought, wherein reality and state of mind liquidly exchange and what is real is symbolic, and what is symbolic becomes what is real: this state of magic is natural to these tales. It is the essence of their wisdom, for they are speaking from a mind that is entranced with what psychologists call the unconscious, those thoughts and experiences that are instinctive or elemental or profoundly personal.

Why Do We Believe in Conspiracy Theories?